I remember I've tried hard when I was younger to create a super easy example of a buffer overflow. I read about it and understood the mechanism, but never accomplished writing a real program which demonstrates the effect.

That thought crossed my mind today and I realized I should be able to do it today with a little more experience.

In addition, I found this wonderful article about it:
dhavalkapil.com

So, I will basically repeat the steps in the article and build my first own buffer overflow program.

As you can see, the buffer size remains unchecked and a user can enter more than the expected 20 characters. This leads to write into parts of the memory the program is not supposed to write.

We will overwrite the RETURN address of the echo() function, in order to call the secretFunction() instead of returning to main(). The address is stored in the stack. We need to find the right location and overwrite it.

We need to set special compiler flags to disable any security checks. It is great the compilers today have that built-in checks, but disabling them makes it easier to grasp the concepts and maybe understand why those checks have been added over time.

Run this to disable ASLR (see below):

3. Running and crashing the program

A text more than 20 characters crashes the program, as expected:

Note: It still manages to output the text, before crashing.

I used to play hundreds of hours with OllyDbg, a debugger for Windows.

During my research and having gdb in mind I thought there might be something similar to OllyDbg for Linux. And indeed there is: https://github.com/eteran/edb-debugger

I've installed it from here, but I needed to change the plugin directory manually after the installation (Preferences -> Directories -> Plugin Directory: /usr/lib/edb). 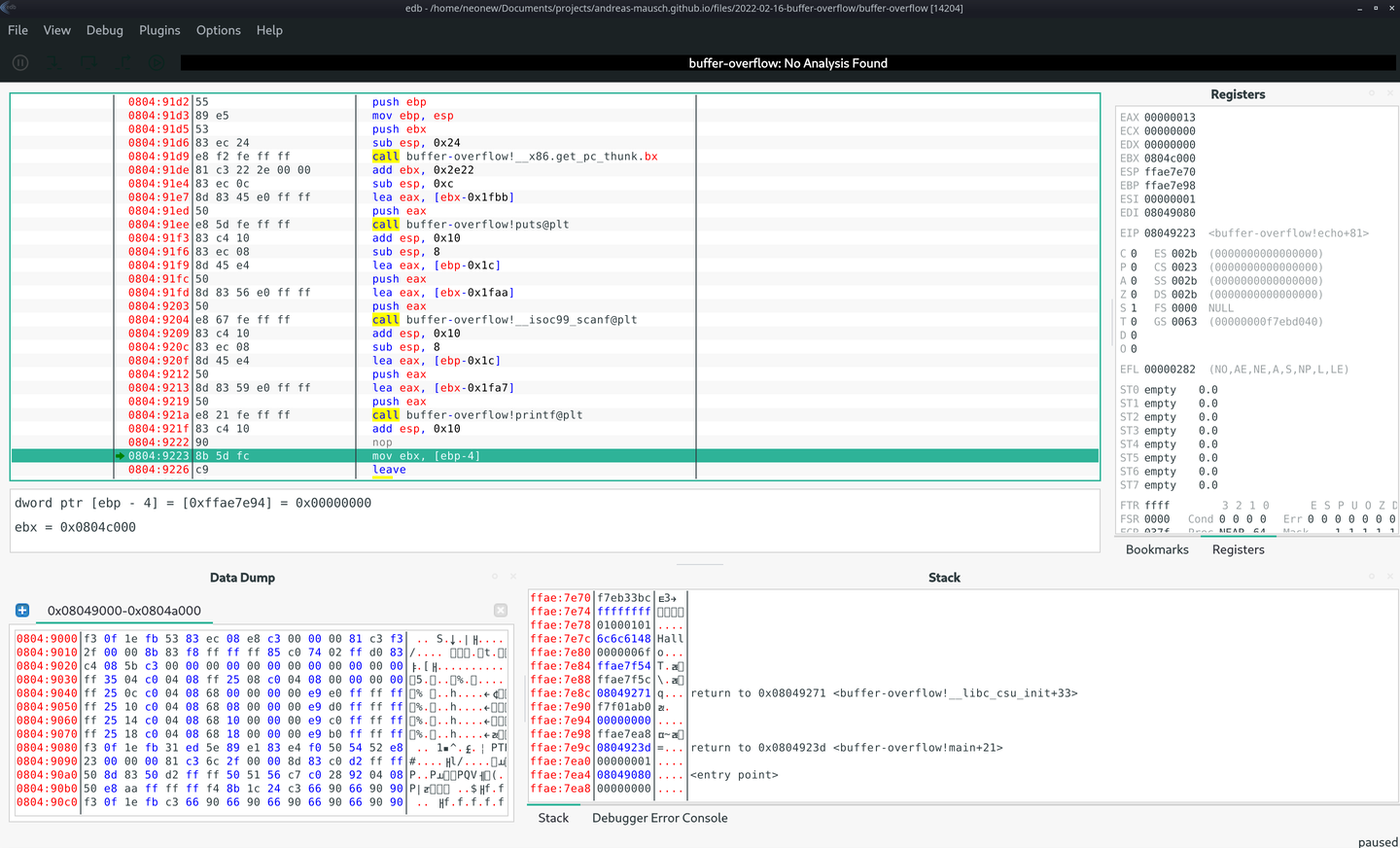 We don't just want to crash our program, we want to execute the secretFunction(). In order to do that, we need to know it's address.

We can either do it in edb (CTRL+ALT+S): 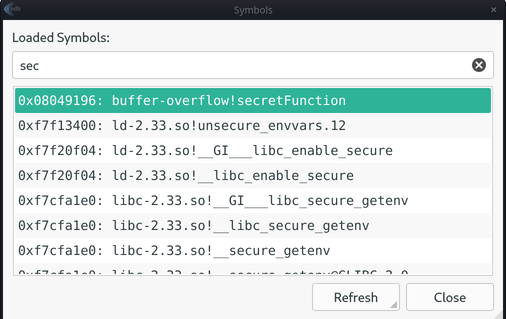 Now, we need to know where exactly to put the address in our input text. See the screenshot for details: 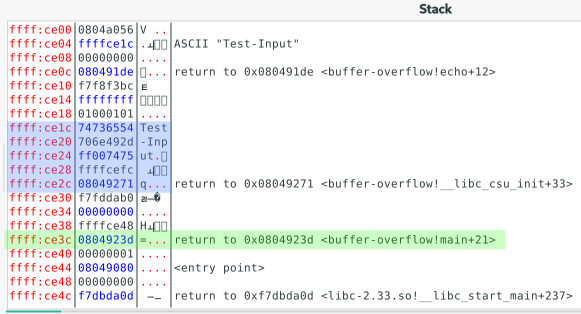 Our variable buffer starts at ffff:ce1c (marked in blue) in this case. The return address to the main function is stored at ffff:ce3c (marked in green).

Voilà. Now, the program still crashes, but our secret function was called before!

Next challenge could be to build a payload which contains and executes own code, instead of executing code which already exists in the binary.

If we replace the RETURN address with the beginning of the buffer variable ffff:ce1c, the input we entered will be treated as binary instructions and is executed:

This fails with SIGILL, Illegal instruction. This is expected, as our aaaaaa.. test string is not valid machine code.

To generate it, we can use yasm for example.

For disassembly, I found objdump useful:

The EBP got overwritten by the too long input. It was stored on the stack, and the leave instruction tried to restore it. In order to not crash the program, we need to restore it. That is what MOV EBP, BUFFER_ADDRESS + 0x2c does.

First note: Our payload must not maintain any characters which would stop scanf() from reading the input. 0x00, 0x0a, 0x20 are all forbidden. That's why we first have the 0xff character after XX, and only the payload writes a 0x00 at the end of the string during runtime.

Second note: The payload length must be exactly 36 bytes. Or at least we need to make sure the RETURN address is written to offset 0x20.

With that payload, the program prints an additional line "XX" and then quits without crashing!

In the real-world we would need to bypass all of those measures.

To check which measures are enabled, you can use checksec: