I want to share my experience developing a watch face for a Galaxy S3 Gear smartwatch. 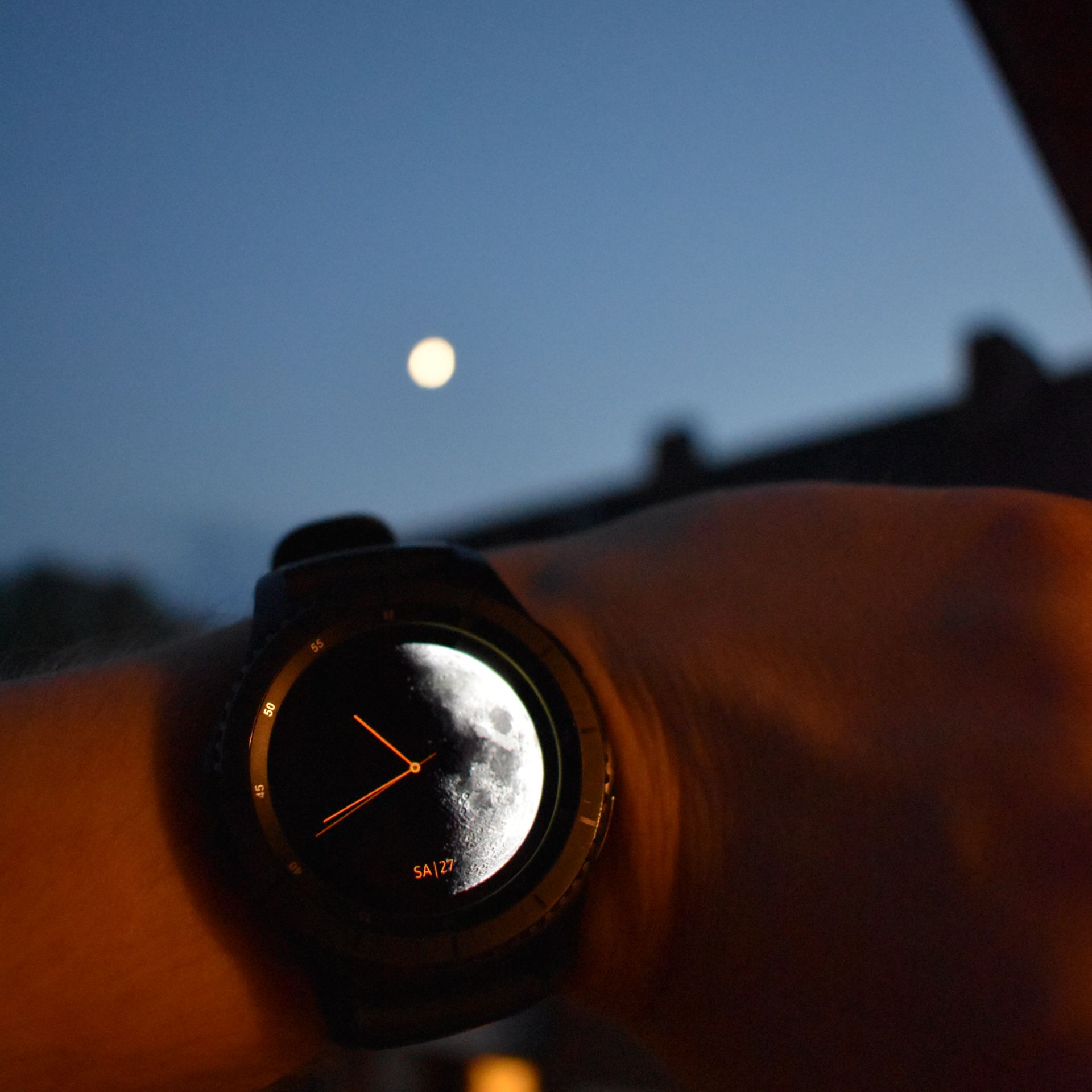 You can find the resulting project here: https://gitlab.com/andreas-mausch/moonwatch

First off, it was difficult to set up a development environment:
The only Linux Tizen SDK supports is Ubuntu.

So, I don't want to switch to a different operating system just to be able to develop software for my target (Hello, Apple!).

Tizen SDK requires Java 8 and only Java 8. I had a recent Java installed, and it didn't work (can't remember the error message tho).

Next try: Install Ubuntu in VirtualBox, add Java 8 and install Tizen SDK there.
Voilà, some progress. Everything installed correctly.

I spent some hours until I found it's possible to develop a watch face via the web tooling. Not sure if I was very blind or the documentation very unclear. (Actually it is pretty much documented here, but that link was hard to be find for me as I started here).
The sample project is really helpful tho.

When I tried to run the sample project for the first time, I had trouble with the emulator. It just gave me a kernel panic:

After some googling it turned out to be a problem with the hardware acceleration. I couldn't enable it because VirtualBox and KVM...something.
The wiki says:

As of today VirtualBox does not provide guest addition with support for Wayland and therefore Weston can not run with hardware acceleration. This restriction makes it impossible to run Tizen IVI in VirtualBox at the moment.

There is also a web simulator, which is basically a Google Chrome (which needs to be installed) with some add-on for the tizen runtime.

The Web Simulator does not support a wearable circular UI.

For me, even the BasicWatch example didn't work, because the browser console explained tizen.time.setTimezoneChangeListener is undefined. tizen.time.getCurrentDateTime is defined however, so I just assume the API is not implemented 100% for watches.

Luckily, running the app on the real device worked (after setting up a certificate). It is not the optimal way to develop, because the turnaround time always takes like ~1min to deploy to a real device, but I can work with that.

One thing I've noticed: I cannot deploy to the real device when I still have the Simulator open. Gna.

Because I only have a very simple app and only call two API functions from tizen, I've decided to mock them for developing purposes. Then, I can just develop with Google Chrome, which makes the whole development process a lot faster.

See this file.
Note: It is only loaded during development mode, so it is not included in the generated production build!

I found it late, but there is a very nice repo https://github.com/kamildzi/Tizen4Docker which makes it possible to run the Tizen IDE (based on Eclipse), the simulator and the emulator with full hardware acceleration on a Linux other than Ubuntu!

This seems to be the best solution in hindsight.

One note: On manjaro I had to do this to get it working:

3. Problems with the sample

The sample uses just plain JavaScript with no dependencies.

Somebody else noticed that already and hopes

that the Tizen team realizes that advanced js tools exist

I hope that, too!

4. CLI commands I use

My goal was to use TypeScript, SCSS, npm and webpack as technologies and Visual Studio Code and Google Chrome as development environment.

I've started off with LukeDS' code and adjusted it a bit (to use a more recent webpack etc.).

In the end, I'm very happy with the result and have a good feeling developing apps for Tizen, even tho it was quite a bit of work to get to that point.

This is a topic on it's own.
I've written about the process here and I plan to move it to the blog.

For just the commands, I have created this gist.